The slippery slope is real

Oregon was the first state in the nation to legalize doctor-assisted suicide. Proponents of the law, which was established by a ballot measure in 1994, convinced a majority of voters that the law had certain “restrictions” and “safeguards,” including that doses of lethal drugs would be strictly limited to patients diagnosed with a terminal illness who were expected to die within 6 months.

Well here we are, more than 20 years later, and Oregon proponents are now pushing for changes to the law. They have introduced a bill, HB 3337, which expands the pool of eligible patients to those expected to die within 12 months.

I recall clearly the words of Jack “Dr. Death” Kevorkian, who admitted to assisting in the suicides of more than 130 people: “What difference does it make if someone is ‘terminal’? We are all terminal.”

And so we see the true aim of the proponents of euthanasia: death on demand. If assisted suicide continues to be permitted as a “personal choice,” and the movement framed as a “civil rights” battle, it will be impossible to limit it to certain populations or specific circumstances. It will be a right for the terminal and the non-terminal, for the competent and the incompetent, the old and the young, the rich and the poor, those who freely choose it and those who are pressured to accept it. And that puts all of us at risk.

The slippery slope is real.

Trafficking victims are our sisters and brothers

The Vatican has designated February 8 as a first-ever “International Day of Prayer and Reflection Against Human Trafficking.” Trafficking is a world-wide problem as well as a close-to-home crime. And each of us can do something to help stop the scourge, as I note in my recent column in the North Country Catholic here. Please take some time to pray for those who are victimized.

The issue of doctor-assisted suicide is back in the news, thanks to the headline-grabbing case of a 29-year-old terminally ill woman named Brittany Maynard. She has moved to Oregon to take advantage of that state’s assisted suicide law. Here’s my take, as published in the North Country Catholic.

Telling the truth about stem cells

Yesterday’s New York Times contained a terribly misleading story about stem cells called “The Trials of Stem Cell Therapy: Plenty of Hope, But Halting Progress.” Online, the story leads with a photograph of embryonic stem cells. It then begins to profile a young man who suffered a heart attack, had significant heart damage, and received a stem cell transplant. His story is obviously one of success, as the next photo we are treated to is one of him break dancing. 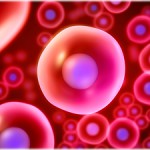 Not once in the first 13 paragraphs of the article does the author differentiate between embryonic stem cells and adult stem cells; they are all mushed together and lauded as “stem cell therapies.” But the 14th paragraph leads with this: “Stem cells harvested from an embryo can turn into any of the body’s 200 cell types…,” and below that, a photo of developing human embryos. Readers could easily conclude that embryonic stem cells had been used to successfully treat the young man.

Turns out, nope, not so much. Only at the very end of the article do readers learn that doctors used adult stem cells from the young man’s own bone marrow to treat his heart damage. These stem cells re-built his cardiac muscle cells, leading him on the path to recovery.

The overwhelming majority of success stories with stem cell treatments come from adult stem cells, an ethical source of these cells which does not require the destruction of innocent human life. Journalists have a responsibility to clearly explain the difference between embryonic stem cells and adult stem cells, and to advise the public of which therapies are actually working.

On the death of Robin Williams 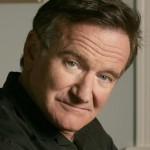 (The following Respect Life column was published in the August 27 edition of North Country Catholic.)

The recent suicide death of actor Robin WIlliams has prompted a renewed national conversation about depression, mental illness and the care and treatment of persons who suffer from these diseases.

I know something about this. My father struggled with severe depression and other anxiety disorders for much of his adult life. At times they were absolutely paralyzing for him, rendering him incapable of performing the simplest of tasks. As a child I did not understand the depth of his suffering; I selfishly focused more on the inconveniences I had to endure rather than the anguish of my father. END_OF_DOCUMENT_TOKEN_TO_BE_REPLACED

Breaking up the Women’s Equality Act

Today some of the most ardent defenders of Governor Cuomo’s 10-point “Women’s Equality Act” (WEA) called for the passage of one of the individual planks of that Act as a stand-alone bill. This is pretty significant, considering that less than a year ago these same women were demanding “ten or none!”

The particular bill in question is a human trafficking victim protection act. Democratic pro-choice Assembly members Amy Paulin, Aileen Gunther, Barbara Clark and Gabriela Rosa passionately condemned sex trafficking and said all efforts must be made to end the horrific scourge. That includes separating it out from the omnibus 10-point WEA and “ending the politics,” they said.

Wow. We’ve been saying that for more than a year now. The Senate passed each of the nine individual women’s bills (including the sex trafficking measure) last June, but did not pass the unnecessary and dangerous abortion expansion. And all nine died in the Assembly chamber, primarily due to the staunch opposition of the Democratic female members. Even Governor Cuomo was willing to break up his own bill last year.

Let’s pray that Assembly Speaker Sheldon Silver hears the pleas of these lawmakers and allows at least this one bill to stand on its own. It definitely has enough bi-partisan support to pass, and by increasing penalties and giving more tools to prosecutors, it really could have a huge impact on the lives of so many young, vulnerable girls who are sold like slaves and exploited in unspeakable ways.

The only dissension comes from the pro-abortion lobby group NARAL, which says the bills should remain linked. Lawmakers should ignore their shrill and obstructionist voice. 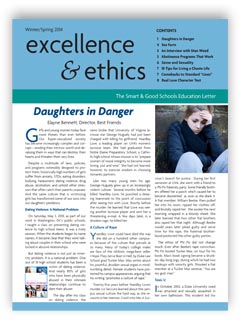 Please take a look at the Winter/Spring 2014 issue of Excellence and Ethics, a publication of the SUNY Cortland School of Education and its Center for the 4th and 5th R’s (Respect & Responsibility). It is filled with excellent articles promoting chastity and character-building, as well as information and practical advice about the growing threats of dating violence and sexual assault. It is appropriate for parents, teachers and students.

The Center for the 4th and 5th R’s was founded and is run by psychologist and education professor Tom Lickona, a dedicated and outstanding pro-life ally in New York State. Its mission is to promote the development of moral character in schools, families and communities. Learn more about the center here. Good stuff!

Today the Supreme Court of the United States heard arguments from two businesses which say that the federal HHS mandate in the 2010 Affordable Care Act compels them to violate their religious beliefs. Specifically, they object to the mandate that requires them to purchase insurance coverage for contraceptive drugs that can cause early abortions. The Green family, which owns and operates the Hobby Lobby craft store chain, are devout Evangelical Christians; the Hahn family, which runs Conestoga Wood Specialties, are practicing Menonites.  Don’t believe anyone who says this is a “Catholic” issue.

The basic issue before the High Court is this: can the government coerce Americans to give up their religious freedom simply because they enter the marketplace to establish a business? Do people forfeit their religious liberty rights when they try to earn a living to sustain their families?

The cases hinges on the federal ‘Religious Freedom Restoration Act,’ passed almost unanimously by Congress and signed into law by President Bill Clinton. Upon the signing on November 16, 1993 on the south lawn of the White House, Clinton declared, “What this law basically says is that the government should be held to a very high level of proof before it interferes with someone’s free exercise of religion.”

Amen to that. What in the world could be so compelling that it meets that level of proof? What could possibly be so important to the government that it would strip First Amendment protections from legitimate businesses and cripple them with massive fines for non-compliance?

Oh, of course: free birth control for everyone.

You gotta be kidding me.

Meet the baby born to mom on life support

A terrific and heartwarming story, but what’s really exciting is that I’m reading it in the mainstream media, the Albany affiliate of ABC news! Note the use of the words “unborn baby.” You gotta love it. 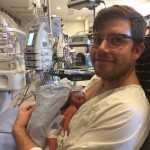 Do your thing: respect life!

I am not a  marcher. I never have been. I don’t participate in Life Chains or pray the  Rosary outside in front of clinics. It’s just not my thing.

Nevertheless,  on Sunday, January 12, I marched. I marched with the Champlain Valley Right to  Life organization in Plattsburgh at their annual March for Life. I was  thoroughly impressed with the dedication and passion of this group of people.  These are believers who are literally willing to “walk the walk,” and their  public witness sends a strong message to the community.

But you know what? Marching is still not my thing.

Read the rest of this column here, in the North Country Catholic.