Following is a statement of Dennis Poust, executive director of the NYS Catholic Conference:

“Throughout human history and in every culture, the disposition of human remains has followed a variety of rituals, but always involving interment or cremation. The process of composting is associated with the sustainable disposition of organic household or agricultural waste to be repurposed as fertilizer for gardens or crops. But human bodies are not household waste; they are vessels of the soul. Therefore, the Bishops of New York State do not believe the process meets the standard of reverent treatment of earthly remains. END_OF_DOCUMENT_TOKEN_TO_BE_REPLACED

Statement on the death of Pope Emeritus Benedict XVI 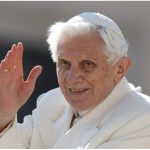 Following is a statement by Dennis Poust, executive director of the New York State Catholic Conference, on the death of Pope Emeritus Benedict XVI:

“The Bishops of New York State and the staff of the NYS Catholic Conference mourn the passing of Pope Emeritus Benedict XVI. At the same time, we give thanks to God for the Holy Father’s profoundly consequential ministry as a priest, bishop, cardinal, pope, and, finally, as pope emeritus. It was in the humility of his final role that he paved a new path for viewing the modern papacy. END_OF_DOCUMENT_TOKEN_TO_BE_REPLACED

“We’re grateful to Commissioner Rosa and the Regents for the seriousness with which they considered this issue. Every child in New York State deserves a quality education, and our Catholic schools have always been more than happy to demonstrate that we are substantially equivalent to — and often exceed — public schools in the education we provide. We are particularly grateful that the Regents have come to a solution that allows multiple pathways to demonstrate substantial equivalency, without burdensome and potentially problematic reviews by local public school districts.

“We’re confident that all of the Catholic schools in the state will be deemed substantially equivalent under the new guidelines. Our tuition-paying families have already deemed us so for generations.”

Statement on Passage of Bill to Enshrining Abortion in State Constitution


Following is a statement from Kristen Curran, director of government relations for the New York State Catholic Conference on the anticipated passage today of legislation to begin the process of amending the state Constitution to include abortion rights:

“Unfortunately, this bill solidifies the message that New York has been sending women for some time now: Abortion is positive, empowering, and the key to success. This couldn’t be further from the truth. Women, children, and their families deserve support and compassion. Baby formula is scarce, raising a family is unaffordable, and the fallout from the pandemic continues to take its toll. New York State should be pouring resources into helping women and families, not promoting abortion through limitless funding, advertisements, and splashy legislation.

“Our elected officials should stop promoting abortion as a woman’s best and only choice, and focus instead on true support for women, children, and families.”

In order for the amendment to become law, the bill must pass two successive legislatures and be put before the voters in a referendum. The Catholic Conference represents the Bishops of New York State in public policy matters.

“We are troubled that the Court has overturned a law dating back more than a century that has been largely accepted by the state’s population for all of that time. The duly-elected members of the state legislature could have at any time over the past 110 years revisited its policies on how it licenses individuals for the purpose of carrying concealed handguns outside the home if it was the will of the citizens of the state. It’s regrettable that the U.S. Supreme Court has now chosen to step in to do so. It’s important to note, however, that the decision does not overturn the rights of states to require licenses to possess handguns, whether inside the home or out. The issue was what the Court considered to be the subjective nature of New York’s law requiring the demonstration of a particular need above and beyond simple desire for self defense.

END_OF_DOCUMENT_TOKEN_TO_BE_REPLACED

Statement on signing of abortion-related bills by Governor Hochul


Following is a statement from Kristen Curran, director of government relations, on Governor Kathy Hochul signing a series of abortion-related measures today, as well as one aimed at harassing pro-life pregnancy centers:

“At a time when women and children need more support than ever, we are disappointed to see New York continue to focus on promoting abortion. This package of bills seeks to encourage abortion tourism, rather than helping women and children who may be in need. As a state that claims to value autonomy and choice, New York should stop presenting abortion as the best and only option for struggling women, and harassing any pro-life pregnancy center that may help women keep their babies. This abortion-or-nothing narrative only demeans women.”

The Catholic Bishops of New York State have released a major new statement on abortion as they anticipate the looming Dobbs vs. Jackson Women’s Health Organization decision by the U.S. Supreme Court, and “the gathering societal unrest over the issue of abortion.” (The full statement is available HERE and in a printable PDF suitable for parish distribution is HERE.)

In the statement titled, “Toward a Pro-Life Future in the Empire State,” the Bishops acknowledge that, regardless of what the Court decides in Dobbs, “abortion in New York would continue unfettered.” They say that Catholics must respond “in charity and with sensitivity, but with clarity” to those for whom the prospect of an overturning of Roe v. Wade has led to “fear and anxiety,” and in particular to women facing sometimes overwhelming challenges of unplanned pregnancies.

The Bishops address head-on the false notion that the Church is more concerned with the baby in the womb than with the mother and child once he or she is born, and announce a renewed pastoral effort, challenging every Catholic entity in the state to join them:

“As far back as the 1980s, the late John Cardinal O’Connor, a giant of the pro-life movement, made a pledge that we reaffirm today: Any woman – regardless of age, religious belief or affiliation, marital status or immigration status – who is pregnant and in need, can come to the Catholic Church and we will give you the services and supports you need to carry your baby to term, regardless of your ability to pay. Furthermore, we will not abandon you and your baby after delivery, but, rather, we will see to it that you have the resources that you and your child both need and deserve. No one will be turned away from life-affirming care. If you have had an abortion that you regret, whether recently or in the distant past, please come to us as well, so that we may offer you services to help you to heal.

To that end, the Bishops have launched a new pregnancy resources page, Help for Moms, at www.nyscatholic.org/helpformoms, where women can find services available to them. The page will be continually updated with new resources.

Finally, the Bishops call on elected officials to work toward a New York that is more supportive of women in crisis pregnancies, and to gear public policies away from continually seeking to increase abortions and toward helping those “who might well make a different choice, if only they were aware of and had other options.” The Bishops then present a list of 12 aspirational statements of what such a New York might look like. Over the coming days, the New York State Catholic Conference’s social media platforms will highlight each of the aspirational statements, with the hashtags #WeEnvision and #HelpForMoms.

“Let us work toward making New York a state where even if abortion is not illegal, it will one day be unthinkable.,” the Bishops conclude.

The statement is signed by Timothy Cardinal Dolan, archbishop of New York, and Bishops Edward B. Scharfenberger of Albany, Robert J. Brennan of Brooklyn, Michael W. Fisher of Buffalo, Terry R. LaValley of Ogdensburg, Salvatore R. Matano of Rochester, John O. Barres of Rockville Centre, and Douglas J. Lucia of Syracuse, on behalf of all of the state’s bishops, including auxiliary and emeritus bishops.


“Governor Hochul’s announcement that she is going to immediately redirect $35 million in taxpayer dollars to enable abortion clinics to expand their capacity to perform even more abortions is a grave misuse of state resources and an insult to millions of pro-life New Yorkers. Inviting women from out of state to come here to abort their unborn children is a breathtaking reminder of how far our culture has fallen.

“We must ask again, when will New York lawmakers begin to dedicate even a fraction of their rhetoric and policies to supporting women who want and need the resources to keep their babies? In this month of Mary, the Bishops of New York State urge all Catholic New Yorkers to pray through her intercession for a change of heart for all elected officials, particularly those who profess the Catholic faith, and for a building up of a Culture of Life in our state.”


Following is a statement from Kristen E. Curran, director of government relations for the New York State Catholic Conference, on a proposal by Attorney General Letitia James and state lawmakers to create a fund to pay for abortions for out-of-state residents who come to New York for the procedure:

“New York is the undisputed abortion capital of the country, where virtually no New Yorker has to pay for an abortion. Abortion coverage is mandated in all commercial insurance plans without any copays, and New York is one of the few states to use state taxpayer funds through Medicaid to provide full coverage for abortions.

“Now some officials want to make abortion a tourism industry, like Broadway or Niagara Falls, for out-of-state residents. This is appalling.

“We believe the state should focus on its own residents and making New York a more welcoming culture for women in crisis pregnancies who would choose to keep their babies if only they had the supports and resources they deserve.”