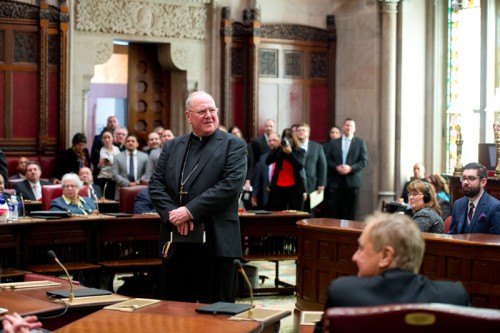 The New York State Catholic Conference applauds the New York State Senate for once again passing the Education Tax Credit bill, with a bipartisan vote of 47-15. As one of the first Senate bills passed in the 2016 session, it clearly demonstrates that the tax credit will be a priority for senators as it negotiates with Gov. Cuomo and the Assembly on the state budget.

“For several years, the Education Tax Credit has been the top legislative priority of the Catholic Bishops of New York State,” said Richard E. Barnes, executive director of the Catholic Conference. “Last year, we came closer than ever to passage, when Gov. Cuomo put his full support behind the initiative, backed by a bipartisan majority in the Senate. The obstacle then, as now, is the powerful public school interest groups, including the state’s teacher unions.

“As Cardinal Dolan has said, the Education Tax Credit is a no brainer in that it helps all schools and all families. For Catholic schools in particular, it can be a game changer in alleviating the funding crisis that has seen hundreds of quality school options for children across the state close in the past two decades simply because families cannot afford the rising costs. We hope today’s action by the Senate is a harbinger of good things to come, and we thank Senate Majority Leader John Flanagan for making it a priority.”