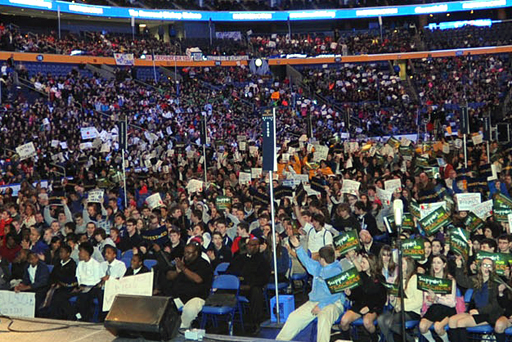 You’d think that learning about the legislative process or a piece of legislation wouldn’t be much to get excited about  — certainly not reason enough to fill an arena. But that’s exactly what happened yesterday in the First Niagara Center at a rally to support the Education Investment Tax Credit bill. Jay Tokasz, of The Buffalo News, said the cheers were “louder and heartier” than what the Buffalo Sabres could get out of their fans. Really? Louder and heartier than a hockey game? You bet. The place was electric. As one of the many organizers of the event, even I was surprised at the level of excitement. Tim, the stage manager and who has overseen many events, was surprised. I think even Mayor Byron Brown and the seven state legislators in attendance were surprised.

Imagine the cheers if Governor Cuomo was there…

Oh, and here’s Cardinal Dolan’s videotaped greeting to the crowd:

Cardinal Timothy Dolan cheers crowd of 10,000 rallying to support the Invest In Ed initiative from InvestInEdNY on Vimeo.

One Response to “Cheers for Education Tax Credits”