First, Do No Harm

Last week a group of doctors and other medical professionals came to Albany to protest the abortion expansion act that is pending in the legislature. They came from all parts of the state and from numerous medical specialties: family practice, obstetrics and gynecology, cardiology, radiology, psychiatry, neonatology. What a courageous and inspiring group they were, taking time off from their very busy schedules, risking so much to put themselves out there and take the morally correct stand. 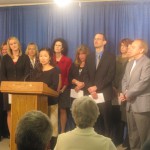 They addressed the media and explained the risks and potential complications of later-term abortion. They noted the near impossibility of any real physical reason that would necessitate an abortion after 24 weeks of pregnancy.  They expressed concern for the safety of women if non-physicians were empowered by the state to perform surgical abortions. They documented the psychological suffering after abortion and how such trauma is often hidden or shelved because it is not considered “politically correct.” They implored lawmakers to help both mothers and infants.

They were so knowledgeable, poised, credible and professional. Their testimony moved me almost to tears, tears of gratitude for their sacrifice, their vocation and their commitment to human life. It was a proud day to be a pro-life New Yorker.