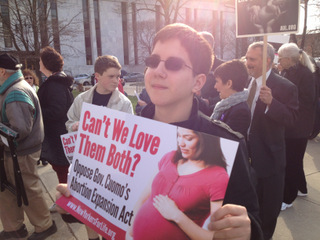 Thanks to all the pro-life New Yorkers who showed up at the Capitol last evening to protest abortion expansion in New York State. Hundreds and hundreds of them packed West Capitol Park and lined the streets with signs asking our government officials, “Can’t we love them both?”  The event was planned by the coalition New Yorkers for Life and drew in individuals and groups from all across the state united in opposition to the governor’s plan to expand late-term abortion.

Some press coverage of the event can be found here and here.

I was particularly moved by the diversity of the crowd: young and old, black, white and Hispanic, Democrat and Republican, male and female, Evangelical, Catholic and Jewish, from upstate and down, people from all walks of life. Everyone there was an integral part of that melting pot, blending together as one harmonious whole with a common goal: stopping abortion expansion and offering pregnant women life-affirming options.

I went home with the knowledge that I was part of something big and meaningful and blessed. Thanks to all who came and witnessed, for your sacrifice, commitment and prayers.